For the love of God, white America, which part of this don’t we get?

Do we not see the armed cop’s knee pressing down for senseless, endless minutes on George Floyd’s neck as he begs for air? Do we not hear a helpless, handcuffed, unarmed man’s pleas for breath and mercy? Do we not register how the whole murderous scene reeks of ownership, control, smug supremacy, and indifference so brutal and inhumane it is sickening?

Do we not see Ahmaud Arbery being killed by white men who had no right to accost him, let alone to shoot him dead because they “thought” he might have committed a crime? Do we not see their grotesque certainty that they had that right, because this man was black and they had guns and suspicions and questions he didn’t answer?

Do we not see how, until the videos held them accountable, the law was absent?

Do we not see, amid a pandemic that is killing black people at disproportionate rates, how decades and centuries of racism, discrimination and deliberate impoverishment of an entire people perform the same function as gun and knife and knee? Do we not see the line etched through history and drawn in blood from those deaths to Ahmaud Arbery’s to George Floyd’s?

Do we not see the irony in the protests? White protestors angry over public health measures storm the holy houses of the people’s democracy in military garb, waving military weapons, to intimidate cowed legislators into bowing to their threats—and are treated with kid gloves. Black protestors in Minneapolis taking to the streets to protest an unjust death are met with tear gas and militarized police. Be peaceful, they are told. But when Colin Kaepernick quietly took a knee, what then? And who would take a knee now, a peaceful symbol forever remade by violence?

When will we finally be honest with ourselves? This isn’t about how someone protests, or whether they transgressed, or any excuse we can possibly dream of to excuse our inhumanity and push away the discomfort. This is about skin. This is about belonging. This is about who gets to live truly free in America, and even more tragically, about who simply gets to live.

When I heard about George Floyd’s death and finally brought myself to watch the sickening video, I was reminded of a poem by the Irish theologian Pádraig Ó Tuama, who for many years led Ireland’s oldest peace and reconciliation organization. A segment of that poem is worth rendering here:

“When I was a child,
I learnt to count to five
one, two, three, four, five.
but these days, I’ve been counting lives, so I count

because each time
is the first time
that that life
has been taken.

One life. Ahmaud Arbery.
One life. George Floyd.
One life, died by gun noose fire COVID neglect poverty racism.
Each the first time that life has been taken.

When did we stop counting in this country? No, better to ask: when did we ever count? Slaves were numbered as property but never counted as lives. Not until Bryan Stephenson built the National Memorial for Peace and Justice just a few short years ago did anyone bother to count and name the lynched. The ease with which we swap one precious life of a fellow human being for the cheap currency of legitimate targets stretches deep into our past and well into our present. We live in a country still doing its official damnedest not to count black votes, and in the Census, not to count lives at all.

Which part of this don’t we get? Oh, I think we understand most of it just fine. We see what we want to see, what we are trained to see. We too often ignore experience that is not ours. We choose this not seeing, this not hearing, this not caring, every time we excuse racist comments, police brutality, voter suppression, the discrimination that locks neighborhoods and families into poverty for generations. Every time we make it the victim’s fault, convince ourselves there were “special circumstances,” we lock in the guarantee that it will happen again, when we will pretend to be shocked once more, asking how it could happen in today’s America when what we should be asking is, how could it not?

I’ll tell you the part I think we miss, though, the part we never seem to get even if we “mean well”: how this affects us, all of us, even those who imagine themselves to be cocooned safely in their whiteness. How it corrodes our humanness. How it perpetuates division. How it limits potential. How deeply it degrades the country we purport to love and defend and honor. How bound we are, every one of us, to those who are killed.

The perpetrators of these crimes make corpses of their victims and murderers of themselves, but they make monsters of the rest of us.

In 1963, after the racist bombing of a Baptist church in Birmingham killed four young girls, the Atlanta Constitution columnist Gene Patterson wrote a blistering column indicting the ethos of the white South that tolerated and fed such vicious hatred. It could have been written today. Here is a segment, with one change—I have replaced the word “South” with “America”:

“We watched the stage set without staying it. We listened to the prologue unbestirred. We saw the curtain opening with disinterest. We have heard the play.  We – who go on electing politicians who heat the kettles of hate.  We — who raise no hand to silence the mean and little men who have their [racist] jokes. We – who stand aside in imagined rectitude and let the mad dogs that run in every society slide their leashes from our hand, and spring.

We – the heirs of a proud America, who protest its worth and demand it recognition – we are the ones who have ducked the difficult, skirted the uncomfortable, caviled at the challenge, resented the necessary, rationalized the unacceptable, and created the day surely when these children would die. Let us not lay the blame on some brutal fool who didn’t know better.

We know better. We created the day. We bear the judgment. May God have mercy on the poor America that has so been led. May what has happened hasten the day when the good America, which does live and has great being, will rise to this challenge of racial understanding and common humanity, and in the full power of its unasserted courage, assert itself.”

Patterson’s point was that responsibility for ending the violence that led to the loss of those four precious lives lay with white Southerners whose sins of omission and commission seeded the soil in which such acts took root. All of society, not just people whose black skin makes them the target, must recoil in disgust and rise up with one voice to demand, no more.

In the 1970s, a decade after my family moved from our native Australia to a land with an even more troubled history of racial injustice, aboriginal activists in Queensland adopted this saying: “If you have come here to help me, you are wasting your time. But if you have come because your liberation is bound up with mine, then let us work together.”

It was the same concept articulated a decade earlier by Martin Luther King Jr. when he spoke of the “network of mutuality” that binds us all together. We cannot dishonor someone else’s one life without denigrating our own. We cannot stop the cycle of dehumanizing violence without giving up the idea that we are doing someone else a favor to stand alongside them in the call for justice. This is not altruism; the freedom, dignity, life we are fighting for is our own.

What does that mean for America, and for white America in particular? It isn’t complicated. Stop making excuses for the perpetrators and hold them accountable. Demand better of our leaders and hold them accountable. Change the laws and policies that devalue black lives and black communities. End the practices that lock in disparity and poverty. Stop dismissing racism as just another “issue” and see it for what it is: poison in the well from which we all drink.

Recognize, finally, that this is our collective fight—a fight for the soul of who and what we are.

Grant Oliphant is the president of The Heinz Endowments. The original post can be found on their blog. 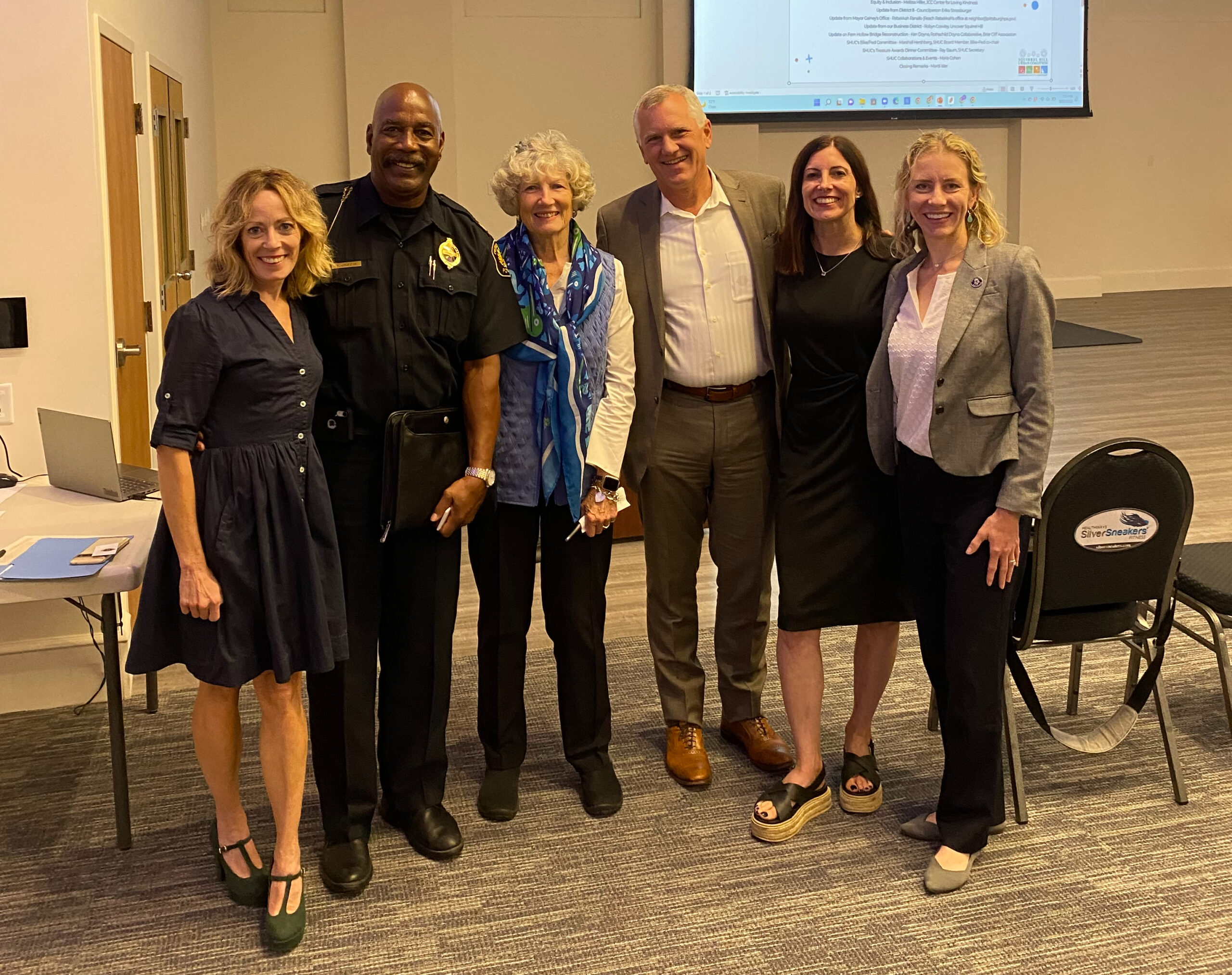 "The Burning Child" film screening and Q&A with Joseph Koerner

Join us at the Manor Theater for a film screening of a documentary about the artist Henry Koerner. A Q&A event at Silk Elephant will follow the showing.
Learn More

Join SHUC and DOORS OPEN Pittsburgh on a walking tour through Squirrel Hill and some of the neighborhood's synagogues.
Learn More

The Henry Koerner house and studio will be open for tours during SHUC and FONLH's weekend-long celebration of the artist.
Learn More

A free educational program about the artist Henry Koerner by his son, Joseph Koerner.
Learn More