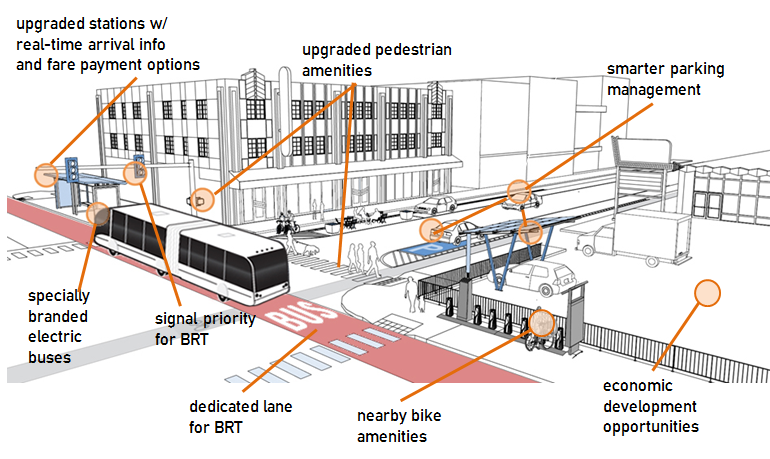 In 2011, Port Authority of Allegheny County and the City of Pittsburgh began a study of potential improvements to the transit system. One possible improvement identified by the study was a Bus Rapid Transit (BRT) that would address transit between Downtown and Oakland, and possibly extend to other East End neighborhoods. On April 3rd, your Squirrel Hill Urban Coalition (SHUC) hosted a public meeting with City Planning and Port Authority to update the community on the status of the BRT plan, which could cost $200-$240 million.

Attendees of the meeting viewed a slide presentation that explained the potential benefits of a BRT, including increased frequency of available buses. Another goal of the BRT is to reduce travel times to and from Downtown; according to the study, it currently takes up to 78% longer to travel from Oakland to Downtown via bus compared to a car. Projected BRT travel times could be 28% (or four minutes) faster than the average car ride.

Some features planners say are designed to contribute to shorter ride times and increased reliability include:

At Monday’s public meeting, planners shared four routes being considered, including two options that would connect Squirrel Hill to the BRT system and two that would not. A map of all four routes, as well as additional information from the study, can be seen in this copy of the slide presentation.

Your feedback on this project is important. We encourage you to complete the online survey to provide your input on possible routes.

After routes are selected, additional community meetings will be focused on establishing specific locations for stations along the approved routes. The project is then set to be submitted to federal officials for funding in September; if approved, the BRT could be operating in Pittsburgh by 2021.